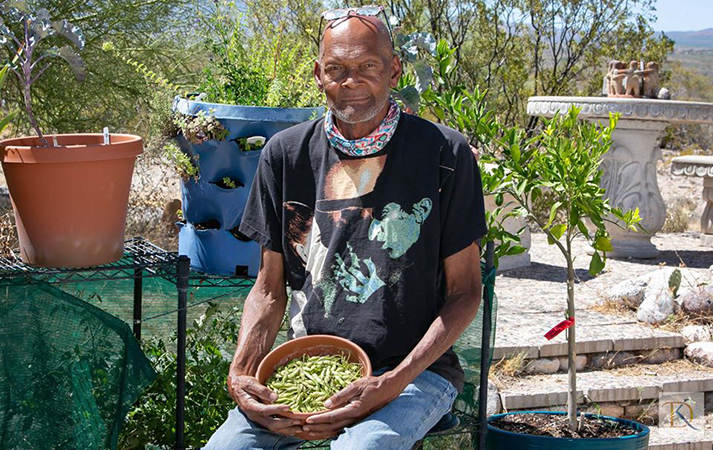 Tucson Black Voices, a portrait project by Kathleen Dreier Photography, features the diverse experiences of our Tucson Black community. May we all become good allies as a result.

“So, this guy asked me a few days ago, white guy that is, why has all the racist stuff start when 45 got elected & did I constantly live in fear.

I told him this has been going on for 400 years ever since my forefathers/mothers were brought to North America as slaves.

I remember when I was a kid in elementary school in Buffalo NY, I was walking to school & tripped on a tree root, fell & hit my head, blood started streaming down the front of my face. Two adult white ladies & a man walked by & started laughing & pointing at me while continuing their walk past me. I wasn’t old enough to understand & the incident puzzled me for a long time.

My counselor at Bennette High School in Buffalo asked me what i wanted to be when I graduate. I told him I wanted to be a Nurse. He said that wasn’t a job for people like me & that I should become a plumber or a carpenter; after all, Jesus was a carpenter.

In Buffalo, I belonged to a High school YMCA club (I was the only Black member). We collectively went to a restaurant & after a flurry of discussion which I was not privy to, we all left the store. After we left, i was told by one of the club members the restaurant does not serve Black people.

During High School summer break I went to Richmond Virginia to visit my Uncle Henry & Aunt Lustrina on their farm. One day during pig-sticking time (slaughtering hogs), when a large number of friends & relatives would get together & bring all their hogs to one farm to be slaughtered, there suddenly there was a flurry of activity, people running snatching up kids, penning up the hogs & everyone heading into the farmhouse. It was an old house & you could kinda see through the boards of the building. All us kids had been rushed into a cellar under the kitchen table but it wouldn’t fit all of us & I was one that was left in the room with all the adults.

There were doors on all the windows which were hurriedly closed & within the doors were slotted which I soon learned for shooting rifles through. There also was hidden doors in the walls that contained shotguns & rifles & they all came out & each window was manned & womaned by individuals with rifles.

I could see through the cracks in the boards what looked like flickering flames coming down the road & the flames stopped at the front of the farmhouse & then there was a resounding hammering on the door.

To make a long story short they were looking for a particular Black individual who was in the house but they were told that every adult in the house was armed & willing to put up a fight. As they left I could see between the board’s men dressed in white robes carrying a huge burning cross.

This is just a smattering of all the racial charged incidents I have had in my life. No, I do not constantly live in fear but I am cautious; there certain places I do not go especially large gatherings of white people.

45 has opened Pandora’s box & allowed every stinking closet racist out of the box. Now they flaunt their racism openly & without repercussions.

I have always owned a gun but now since 45 has given racist a blank check to do what they will at their own discretion, I now carry it openly on my side which at least will deter the timid racist & as protection against the more aggressive ones.

To be born Black is a potential death sentence. At the present & as it has been for 400 years, all you can do is keep on trucking & be aware.” – Ron Austin